The Eagle eye on Thailand. Become a news leader on the Land of Smiles

The Thai Examiner is an enjoyable user experience designed to help foreigners develop a positive relationship with the kingdom known as the Land of Smiles. With its balmy weather and happy people living to their own traditions and code, it is easy to understand from your first visit, how it is well named. As well as balanced, insightful and honest news reporting, we offer our readers and users a news networking service. Our online community, forum and social network is also there for Thai nationals who wish to get to know foreigners and understand and develop a positive relationship between Thailand and the world.

Thai Examiner is a growing news website, now with a social network which generates millions of reader impressions in Thailand, the United States, the United Kingdom, Europe as well as Australia, New Zealand and other countries in Asia each month. Our readership has increased over 300% in the last 8 months and we are poised to expand this even further in developing a vibrant online community of foreigners who love Thailand. We are also  extending this to Thai nationals interested in forging links with countries and societies outside of Thailand. The Thai Examiner is for anyone who wants to become a news leader on Thailand and its positive relationship with the rest of the world.

Thai Examiner is one of a number of websites operated by AtlanticThai Internet Co. Ltd in Bangkok (please see contact information below). Our company has been operating in Thailand since 2005 and during that time we have launched Capitol.fm Hitz Bangkok – The World Station and Thailand’s leading international dating Site with over 360,000 members, ThaiLoveLines.com.

As the years go by, there is now a growing community of foreigners not only who are living in Thailand but also many more who have a connection or affinity to the country. This news service is for you.

Thailand is currently a country in flux with many changes under way. It faces many challenges. One of the changes, with many positive implications, has seen Thailand opened up to world with growing numbers of visitors to the country and significantly growing numbers of Thais immigrating to western countries with burgeoning Thai communities all over the world.

The strength and originality of Thai culture means that, despite globalization, it is still a deeply traditional and complex society which can sometimes be difficult for foreigners to understand. Therefore, news from Thailand and current affairs can often present challenges to foreigners living within and without Thailand. Thailand is also a country and nation that increasingly seeks to retain and support its own unique culture and identity even as it opens up to trade and friendship with the rest of the world. We think this is a wonderful aspiration.

The aim of the Thai Examiner is to present a simple and clear portrayal of the important news events from Thailand for foreigners who live in Thailand or simply love the country. 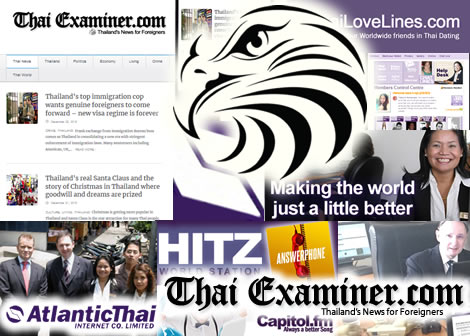 ThaiExaminer.com was launched in 2015 to bring unbiased and honest news to  foreigners both living in Thailand and those who visit Thailand, are planning to visit or simply love this most unique of countries. Thailand often is the subject of negative press coverage in the western world. Since the explosion of sex tourism in Asia and Thailand in the 1970s, for some reason, the focus has been on Thailand and in particular Bangkok and Pattaya. These are two of Asia’s most popular tourist destinations. Bangkok is one of the World’s most visited cities and Pattaya was recently listed in a Mastercard Top 10 list of Asian city tourist hotspots. Many are familiar with the highly derogative portrayal of Thailand as the ‘sex capital of the world’ and the consequent association of this with poverty and exploitation. Many people worldwide never come out from behind that stereotypical and prejudiced view of Thailand. This and the country’s unique susceptibility to military coups has given the country negative connotations. This perception is well utilized by many western tabloid newspaper editors to sell extra copies. Sex sells and it is often at the expense of Thailand’s reputation and good name!

One of the oldest functioning states in the world

Yet, Thailand is one of the longest existing functioning states in the world with a state apparatus that has been functioning smoothly for over two centuries incorporating an advanced legal and property rights system which is deeply rooted. It has a flourishing society and highly original culture. It is home to some of the wealthiest people and families in the world. It is a country that has reduced its poverty rate from 44% in 1988 to under 7% today. It has under 1% unemployment, the lowest unemployment rate in the world. Thailand has cut its inequality rate in half in the last 10 years alone. It is the 2nd largest economy in ASEAN or Southeast Asia and the 9th in the greater Asiam region including the Middle East and Russia.

Closed off from the rest of the world until the early 20th century, it developed its own way. In the 21st century, it is a proud nation state that has made impressive strides in the last fifty years transforming itself from an poor agricultural economy to an industrialized one, reducing poverty dramatically and preserving its own unique identity. Thailand’s tradition and culture has produced a nation that is akin to a huge extended family under Thailand’s revered monarch. And while there are many negative stories that are rooted in reality, there is a very real misconception and misunderstanding about Thailand even among regular visitors.

The honest truth about Thailand is deeper, complex and often paradoxical for western foreigners

Our news website and social network aims to explore the reality and the honest truth. We want to alert our readers to the very real issues that exist between Thailand and its foreign visitors. Foreigners in Thailand are a growing and respected community with links to the kingdom. This community exists within Thailand and within more and more pockets of expatriate Thai communities across the world more often than not led by Thai women who have married western foreigners and introduced to them to Thailand. Thai Examiner is a news website for this growing community. Foreigners living in Thailand, those who love Thailand and also Thai nationals interested in the western world. The truth about Thailand is often deeper than the story on the surface suggests. In fact, much of what happens in Thailand is a paradox when seen and judged by western eyes.

Our company was founded by two Irish men, Joseph O’ Connor from Cork and Tony Fitzpatrick from Tipperary in Ireland in 2005 along with Thai shareholders who play an active part in our business. The mission of our company is a commercial one but it is also a lot more than that. Our primary mission is to develop and foster friendship, understanding, respect and even love between Thailand and the western world. In the end of the day, we are a small company with a modest mission to make the World a Little bit Better in this special sphere of activity.

Subsidiary in Ireland, staff in Thailand and Asia

Our company has a subsidiary company in Cork, Ireland which manages our Premium Membership sales and advertising sales for our websites in cooperation with our operations centre in Bangkok. Thai Examiner employs journalists and writers both in Thailand, Asia and western countries. We are always excited to hear from potential new partners and colleagues in our mission, please feel free to get in touch. We are currently expanding our news coverage and looking for more journalists and writers to work with us.

We believe that Thailand, with its unique history and culture, has a lot to offer the world while Thailand’s leaders and people have always been enthusiastic to forge better links, understanding, trade and goodwill between Thailand and all foreign countries. However, it is a country that wishes to preserve its own culture, tradition and unique approach to doing things. Thailand has a proud history as a nation and independent state, one which we hope we can help or readers and members to appreciate and understand more through our work as a foreign observer and witness to news and current affairs in the kingdom.

Become a news leader on Thailand

Posted by ThaiExaminer.com on Friday, October 12, 2018

Thai Examiner uses cookies on its website to give you the most relevant experience by remembering your preferences and repeat visits. By clicking “Accept”, you consent to the use of ALL the cookies.
Cookie settingsACCEPT
Manage consent

This website uses cookies to improve your experience while you navigate through the website. Out of these, the cookies that are categorized as necessary are stored on your browser as they are essential for the working of basic functionalities of the website. We also use third-party cookies that help us analyze and understand how you use this website. These cookies will be stored in your browser only with your consent. You also have the option to opt-out of these cookies. But opting out of some of these cookies may affect your browsing experience.
Necessary Always Enabled
Necessary cookies are absolutely essential for the website to function properly. This category only includes cookies that ensures basic functionalities and security features of the website. These cookies do not store any personal information.
Non-necessary
Any cookies that may not be particularly necessary for the website to function and is used specifically to collect user personal data via analytics, ads, other embedded contents are termed as non-necessary cookies. It is mandatory to procure user consent prior to running these cookies on your website.
SAVE & ACCEPT