The airline has confirmed it is reviewing every aspect of its operations including all routes as it scrambles to stem unsustainable losses with a viability plan to present to the Thai government shortly to keep the airline flying.

The President of Thailand’s national carrier has made it official. Thai Airways International is in crisis and facing closure if it fails to turnaround its business in a timely manner. The alarming news for staff and executives at the airline came on Tuesday from Sumeth Damrongchaitham who told them ‘there is not much time’ if the airline is to be saved. 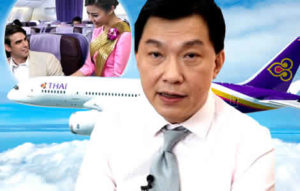 On Tuesday, while denying any decision had been made on route closures in the face of media speculation, the President of Thai Airways International could not have been blunter with staff at the airline when he addressed them during a training exercise at the company’s headquarters in Chatuchak, Bangkok.

He said that Thai Airways was facing a crisis and that both the management and staff had very little time to correct its path to avoid the closure of the company which has existed for nearly sixty years as an international airline which has become synonymous with the kingdom’s image abroad.

He called for unity and dedication from the staff at the airline reported to number over 20,000 people. ‘Today I want staff to be united to overcome the obstacles. Otherwise, the national airline must close down. There is still time for a solution, but there is not much time,’ Mr Sumeth was quoted as saying in the Bangkok Post.

The airline boss was clear that his message was not just for the executives at the airline whom he was addressing but the whole staff.

The Thai Airways president referred to the company’s losing battle for market share as it fails to compete with low-cost rivals as the reason for the dire situation it now finds itself in.

In August, the company reported a stunning loss for the first 6 months of ฿6.44 billion compared to a ฿383 million loss for the same period in 2018. It brought total reported loses at the airline to a staggering ฿280 billion. The President told executives that competition was ‘very fierce’ this year.

The company is 51% owned by the Thai government with a further 47% held by public shareholders with the firm listed on Thailand’s SET stock exchange.

In August, the airline blamed a downturn in the tourism sector and a sharp spike in the value of the Thai baht for the deterioration in its performance.

The company has thought itself shielded by what appeared to be the support of the government as it implemented a long term turnaround plan that involved it in a joint partnership with Rolls Royce in aircraft repairs and servicing.

Even up to recently, it was pushing the government which has kept it flying, despite its hefty losses, to facilitate the purchase of a new fleet of aircraft to allow it to improve its performance on existing routes and introduce others.

This was all thrown aside in early October when the Deputy Transport Minister Thaworn Senniam, called for a new short term plan and focus from the airline management warning them that they would be responsible for the consequences if the company failed to adjust to its current circumstances.

‘Thai is really in crisis’ said the airline boss

On Tuesday in Bangkok, that message relayed to the executives and staff at Thai Airways International. ‘Thai is really in a crisis. Next year it must do its best. If staff are still unaware and do nothing, they will not have enough time to fight back. Today very little time remains. Today there is no comfort zone. Everyone will die if the vessel sinks,’ Mr Sumeth told executives.

Cuts across the board in salaries, inventory and rewards for staff – only reward is having a job

He outlined plans to cut managerial salaries and costs across the board including a plan to adapt the airline’s famous catering service to a policy of not maintaining inventory.

The airline boss also seemed to rule out bonuses and rewards for staff in the foreseeable future: ‘There will be no other rewards for the staff because the top prize is the survival of the company,’ he warned.

Hit back in past years at negative media coverage

The airline has often in years past hit back at media coverage of it which suggested that it as not performing well and running the risk of becoming obsolete. The firm while it has significant shareholdings in smaller low budget carriers and is partnering with Rolls Royce in an aircraft servicing venture, has failed to adapt like other world airlines to the competitive market place.

Formed in 1960 as a joint venture with SAS

Initially, many westerners were involved in the management of the firm but after the Thai government bought out SAS in 1977 this waned so that by 1987 the company’s staff was only 1% made up of non-Thais.

Thai Airways flourished in the 1980s as Thailand also boomed and was one of the first Asian airlines to open up into Europe, being the first to run a scheduled service from Bangkok to London’s Heathrow Airport.

It had a reputation for excellence in customer care and its in-flight dining service. The airline grew in line with the explosion in Thailand’s tourism industry and its economic development. During this era, the airline was a founding member of the worldwide Star Alliance of top quality airlines.

Cut long haul flight to the United States in 2012

The company’s financial and operational problems became apparent in 2012 when it suspended its long haul flights to Los Angeles and New York. This was followed in 2015 with a new strategy concentrated on European and Asian destinations.

The airline is still a significant player operating 80 aircraft and flying to key European cities, across Asia and 5 cities in Oceania.

Reports of ASEAN route closures denied by the boss

On Tuesday also, the airline President Mr Sumeth moved to deny media reports that Thai Airways was planning to cut flights to key ASEAN neighbours Laos, Cambodia, Vietnam and Myanmar as part of the new turnaround plan being drawn up.

On Monday, the President of the airline presided over the launch of its luxury Royal Orchid Prestige lounge catering for business calls customers and first-class travellers.

The luxury facility located at Suvarnabhumi Airport is designed with an ‘Ecology Green Mood’ theme and will be open daily from 5 am to 2 am serving the airlines top-level customers as well as holders of its Platinum Royal Orchid Plus membership card and Star Alliance flyers from around the world.

Joseph Anthony is an expat from Ireland who has lived in Thailand for the last decade. He has worked extensively in the media including editorial positions in Ireland and Thailand. He is focused on economic and business stories in Thailand as well as the expat lifestyle.